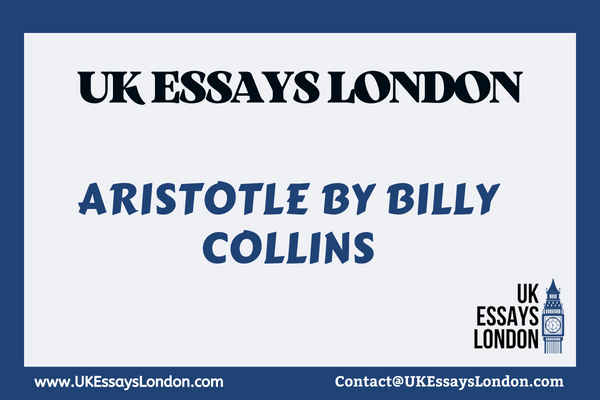 This poem’s rhetorical structure led to its title. In order to respond to the philosophical statement that “a whole refers to which has a beginning, middle, and an end,” Billy Collins wrote this poem. Billy believes that a beginning is calming because it occurs naturally. An end, on the other hand, is something that comes after something else. A middle is something that comes after one thing as another comes after it. In other words, Billy is attempting to establish the notion that a good plot should never begin randomly but should adhere to the aforementioned quote and principle. Additionally, he specifically elaborates the famous Aristotelian statement throughout his poetic work. Everything has a beginning, middle, and end, as demonstrated by Billy Collins’ “Aristotle,” who also provides an example of order and chaos.

Collins’ use of stanza breaks to categorize the specific elements found in each section of the plot is rhetorical. He continues to go into great detail about what happens at the beginning. Collins also offers a variety of information to readers in an effort to stimulate thought. He unifies the desired elements in his stanzas by including a beginning, middle, and end. The beginning exudes a sense of optimism and simplicity, whereas the middle plot is crowded and demands strong decision-making skills.

The use of rhetoric is also clear in Billy’s definition of a work of art as having a beginning, middle, and end. In essence, he attempts to make them simple while persuading the reader of the importance of order. This illustrates how human nature drives people to seek out this kind of order in their daily lives in an effort to avoid complications in the future. The beginning only offers a faint hint as to the mystery of life and what we do not yet understand. However, in the middle, things become a little more challenging, and the initial events begin to take place.

The creation of light at the beginning of Collin’s poem, which indicates that the story is about coming to life and how things start to make sense, can be read as a commentary on life. People experience frustration and difficulty in the middle. Billy’s statement that “nothing is easy anymore” and his comparison of life to falling leaves at the end make this abundantly clear. This is how life continues in relation to these poetic expressions. He employs a number of literary devices that tend to paint a broad picture of life as a whole.

The subject poem has a clean organizational structure with distinct sections. The poet emphasizes a distinctive rhetorical style by stating explicitly that “this is the beginning” and “this is the middle.” This encourages the reader to fully analyze the poem and gain understanding of a particular commentary on both life and poetry. The poet also offers insights into his life experiences as a result of personal decisions. The poet emphasizes the author’s analysis in statements with strong informal messages.

In conclusion, Billy Collins’ Aristotle poem follows Aristotle’s principle guidelines, which are meant to offer commentary on life, in that it has a beginning, middle, and end. The poet also emphasizes the necessity of structure in life to avoid complications. The poet also goes into great detail about the experiences that everyone has in life.