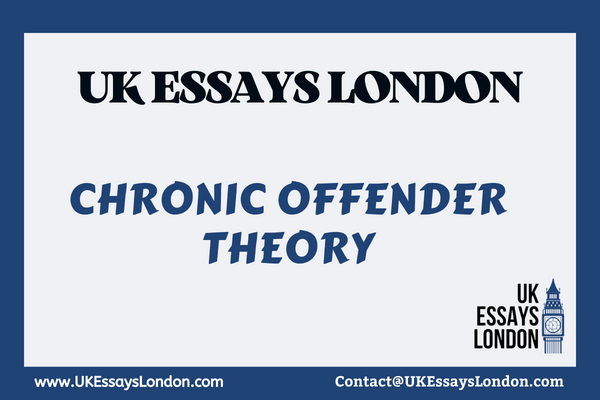 The term “chronic offender” can mean many different things depending on how one interprets criminology. The main characteristic that distinguishes a chronic offender from some other criminals is that they frequently interact with law enforcement and have a history of protracted arrests. It makes no difference if the repeat offender was detained in connection with the seminar or other offenses. The law enforcement agencies occasionally use the argument that if a community has a higher crime rate despite having a smaller population, it is typically the chronic offenders who tend to make this situation (McGloin & Decker, 2016)

One of the biggest issues with chronic offenders is that they have a history of substance abuse, which brings us to the topic of their regularity of behavior. At the same time, chronic offenders frequently have serious psychological and mental health problems. Both of these problems typically have mutually exclusive characteristics. They turn to drugs for solace as a result of the severe depression and mental anxiety they are experiencing. They turn to crime in an effort to get drugs, but that is not a long-term solution. They are more likely to commit these crimes due to socioeconomic factors like a lack of financial resources and a lack of education. There are people who turn to these methods in order to make quick and simple money before slipping into a life of crime. As a result, the chronic offenders have a few very distinct characteristics (McGloin & Decker, 2016).

Gangs first appeared in the United States in the latter part of the 17th century, according to history. The immigrant population joined these gangs in order to form a sense of identity as people of various ethnic backgrounds and religions began to arrive in the area. The growth of cities gave gangs the chance to gain more power (Schauss et al. 2015). Despite their size, they tended to stay within their own boundaries and did not pose a greater risk to the public’s safety. They first started to pose a serious issue for the law enforcement community at the turn of the 20th century. These gangs’ criminal activities began to include delinquent behavior as well as minor offenses like fighting with other gangs (Schauss et al. 2015). However, as time went on, the crimes became more serious, and they came to be seen as serious criminals. They began to develop a subculture, and each of the gangs had its own set of symbols, racial identity, operating area, and modus operandi that were distinctive and different. The power these gangs wield and the demographics in which they live differ depending on the circumstance (Schauss et al. 2015).

Theories About How Gangs Form

The universal definition of a gang and what actually constitutes a gang are not hindered in any significant way (Schauss et al. 2015). Both the social and the economic dimensions of crime are considered in the two categories into which the theories of gang formation are divided. While the other group of theories tend to talk about the criminal’s mental state.