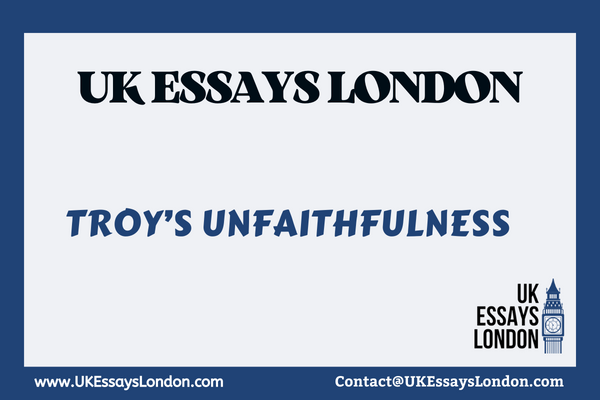 Even after being married for a number of years to Alberta, Troy still cheats on Rose. Alberta marries Troy and later gives birth to a child as a result of their connection. Troy tries to explain why he betrayed Rose and why he did it. Troy explains to Rose why he cheated on her, but this is insufficient justification for being disloyal to Rose. In his justification, Troy contends that the demands and expectations of his life as a breadwinner and the never-ending responsibilities of marriage drove him to hunt for a way to relieve himself of these obligations.

Troy explains to Rose that he cheats because Alberta offers him a new understanding and idea of who he is. Troy claims that by establishing a relationship with Alberta, he can change and forget about the issues in his home. Troy claims that by engaging in extramarital affairs, he can stop worrying about managing his finances and making arrangements to have the roof fixed.

The narcissist Troy. A narcissist is someone who says they love their partner while mistreating the people they still maintain they love. Due to his devotion to Rose and his continued cheating on her with Alberta, Troy is a narcissist. Troy demonstrates his masculinity by having an affair with Alberta and demonstrating that, as the man of the house, he is free to do whatever he pleases. Troy’s lust and adultery also significantly demonstrate his masculinity.

Troy engages in an affair with Alberta, who eventually gives birth to Troy’s child as a result of this affair, in an effort to avoid his responsibilities as the Maxson family’s provider. Troy explains to Rose, his wife, why he had an extramarital affair, saying that the demands and responsibilities of his life as a family man drove him to hunt for a means to relieve himself.