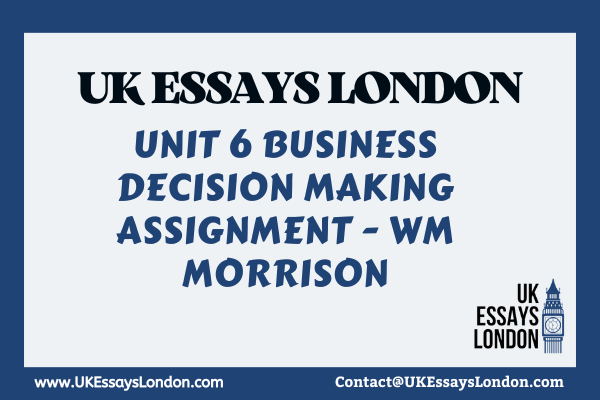 The process of identifying a business problem, acquiring data relating to the problem, analysing and evaluating facts and statistics, and drawing conclusions on the basis of which a decision is made to determine the best course of action to solve the problem is referred to as business decision making. This WM Morrison unit 6 business decision-making assignment aims to assist WM Morrison, a food discount retail store in London, in solving its business problems based on the information provided in accordance with the evaluation of data gathered from a survey into consumer behaviour and attitudes toward food discount retailing stores in Greater London.

P1.1 Plan for collection of primary and secondary data

Primary data refers to information that is acquired for the first time for a specified reason. Customers that frequent retail establishments and grocery stores in London will be the target group for data gathering, so their perceptions may be recognised and analysed. Customers over the age of 18 will be included in order to collect relevant data. This will take around 3-4 months to collect data from all of the clients within the sampling window and sample. These consumers will be given surveys to complete, as well as personal questions to answer during interviews, and their replies will be recorded and summarised.

Human resources as part of a team, digital communication resources, internet resources, mobile phones and telephone devices for telephonic interviews, and other resources will be required. (2012, Olsen)

Secondary data is information that hasn’t been obtained for a specific purpose or that has been acquired for another reason but may be utilised in the survey. The secondary data collecting strategy will entail obtaining information from secondary sources such as journals, publications, annual reports, articles, and websites that offer information on the performance of food discount retail establishments in London and WM Morrison. Secondary data may be collected via the internet.

Questionnaires and interviews will be used as part of the survey technique. Customers of retail businesses and grocery stores in London will be handed the questionnaire, which they will be requested to complete and return. Customers who could not be reached physically will get questionnaires in the mail, which they must complete and return. The interviews will be performed by directly asking questions about customer satisfaction to the target audience as well as by calling them on the phone (Hassine, 2016). Customers of food discount retail stores and grocery shops in Greater London who are above the age of 18 will be included in the sample frame, which will encompass 60% of the target population. Customers will be chosen using statistical sampling, which means that every fifth consumer that visits retail stores and grocery stores will be chosen to form the sampling frame and sample from the target demographic (Asan, 2013).

As part of WM Morrison’s study regarding customer behaviour and attitudes toward food discount retailing, please answer the following question by ticking the most acceptable answer in your opinion:

3. What is your current employment status?

Employment in the government, business, and private service

4. How much money do you make every year?

Yes\sNo\s6. Do you buy at grocery stores that provide goods at a discount?

7. How far do you have to go to your typical grocery store or food discount retailer?

8. Do you shop for groceries or food using food discount retailing systems vouchers or discount coupons?

9. Which of these four food discount retail outlets would you like to shop at for groceries or food items?

Coupons or vouchers for a discount

a wide range of products

11. What is your monthly food discount retail shop spending?

12. WM Morrison is Greater London’s greatest food discount retailer. Do you agree with me?

The responses received from respondents through questionnaires filled in by them as the part of survey into the  customer satisfaction  behaviour and attitude towards the food discount retailing stores in Greater London for WM Morrison on various aspects of research included 43% female and 57% male respondents. There were 28% respondents between the age of 18 to 25 years, 40% were those belonging to age group of 26-35 years, 20% were from age group 36-50 and 12% were above 50 years of age. As far as working status is concerned, 10% were government employees, 56% were businessmen, 22% were private employees, 2% were unemployed and 8% were those who did not work and were dependents. The income of various respondents was as follows:

85 percent of the total responses were London residents, while the remaining 15% were visitors. 62% stated they went to food discount retail outlets on a regular basis, 23% said they went occasionally, 5% said they never went, and 10% said they usually went. The majority of people utilised food discount coupons and vouchers when shopping in stores, and just a small percentage of people said they never used them. The following were the results for the most preferred store:

The following are the replies collected for the most significant element to consider by customers while buying at food discount retailing stores:

Customers’ replies to their monthly food discounted retail shop expenditures are as follows:

The following replies were given in response to the question of how many people think that WM Morrison is the finest retail shop in Greater London:

The average of the replies or figures in the collection of data is represented by the mean. It’s determined by multiplying the total number of values by the number of values. The following is the mean formula and calculation:

The mean is the product of the sum of the values and the number of values.

The value that appears the most frequently is known as the mode. There will be no mode of the values if no value is repeated in the series or collection of data. It is the data value with the highest frequency.

There is no mode of these values because no value is repeated.

The mean of the responses about how many people agree that WM Morrison is the best food discount retail store in London can be observed from the above calculation of representative values and summary of data using the responses received from the survey into the customer attitude and behaviour towards food discount retail stores in London for WM Morrison. This indicates that for this perspective, the average number of replies received is 20. The median of the replies is 22, indicating that the most common value is 22. As a result, the chances of the number dropping below or over 22 are identical. The answers have no mode, which indicates that no value is repeated.

According to the graph above, most people choose to shop at WM Morrison and Js Sainsbury’s out of the four major food discount retail stores in Greater London. It implies they are both important rivals, but Lidl and Aldi are also not far behind. As a result, WM Morrison is already well-known among London purchasers.

The pricing of products, the quality of food items, and the discount coupons supplied by retail stores are the most essential variables in the choosing of a food discount retail store for purchasing groceries and food items, as shown in the above chart.

Customers’ monthly spending at food discount retail establishments in London is seen in the graph above. It may be determined that a big number of clients paid between £2,000 and £5,000, with an average of £2,000 spent. For a minimum of persons, the expense exceeds £10,000.

According to the graph above, a considerable portion of the public, including customers over the age of 18, believes that WM Morrison is the greatest food discount retail shop in London. A few people are vehemently opposed to this viewpoint.

Operational decision making refers to WM Morrison’s choices relating to the company’s operations, which are overseen by the company’s lower level management. Middle-level managers who conduct observation, control, decision-making, and other managerial tasks are involved in tactical level decision-making. Senior management is involved in strategic decision-making at the strategic level, as they prepare the processes for the company’s strategic concerns. Management Information System (MIS) at the strategic level, Transaction Processing System (TPS) at the operational level, and Decision Support System (DSS) at the tactical level are the information processing tools that the organisation can employ at various levels.

Because the firm may only invest in one project, WM Morrison Supermarkets Plc plans to assess the financial sustainability of two proposed capital investment projects, Project and Project B. Both initiatives have a ten percent cost of capital and a £500,000 initial investment. Financial metrics such as NPV and IRR can be utilised by the firm to analyse viability and make choices. The following is the formula for calculating the NPV and IRR for both projects using Excel:

The current value of a project’s net cash flows is referred to as the net present value (NPV). In compared to the initial outflow, a larger NPV indicates that the project will be able to create more cash inflows in the future.

Recommendation for decision-making – Project A has a greater NPV and IRR than Project B among the proposed capital investment projects for the firm. As a result, the corporation will accept Project A since it has the potential to create more cash inflows.

Based on the data collected from the survey and the use of information processing and decision-making tools, it can be inferred that WM Morrison is popular among London customers. This report might give important information to the company’s management resources to aid them in making business choices. In addition, the official report addressed to management has supplied them with information on the company’s dangers as well as strategies for dealing with these threats.