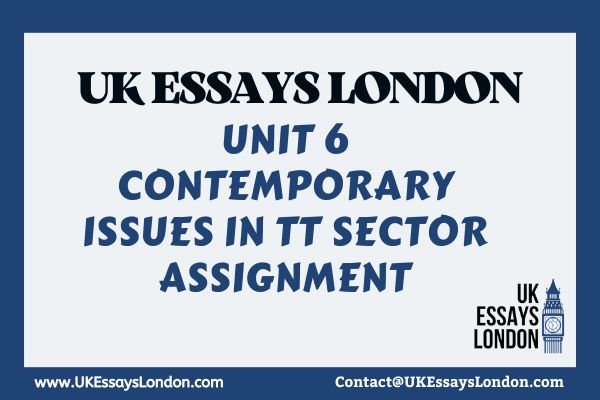 The goal of this element of the work will be to explore and analyze a variety of difficulties that are now causing numerous changes in a particular tourist sector. Diverse contemporary concerns in the same industry will also be investigated using relevant resources and methodologies. A specific travel and tourist location will be picked for this phase of the job, and conversations will be held around it. India was chosen as the location for this section of the project because it is a growing tourist attraction in the worldwide market and is now experiencing a lot of changes. For this investigation, a variety of the most recent accessible statistics will be considered.

P 1.1 Analysis of issues driving change in the travel and tourism sector

India, which is Asia’s most popular tourist destination, will serve as the basis for this debate. Because of the large number of arriving tourists from the United States and other European countries, as well as Russia and neighboring Asian countries, the location draws a lot of tourism. Because of the opening up of the nation’s economy, as well as other infrastructural and technical improvements, this destination has seen a lot of important structural and other changes in the last couple of decades, making it a suitable case study to analyze.

The destination’s constant double-digit growth was only interrupted during the year of the global economic catastrophe, which had a substantial negative impact on the worldwide tourist sector (Burns, 2013).

The causes that are now driving these beneficial developments in the nation’s travel and tourism sector are as follows:

Changes are being driven by economic factors such as: Incoming business tourism is a primary driver of tourism development and hence change in the tourist sector for every place. Prior to the year 1992, India’s economy was restricted to international investors. Following the economy’s opening, a large number of international corporations increased their operations in the country, resulting in incremental business tourism for the location.

There was a lot of inbound tourism for the official work of these newly arrived international corporations with operations in India, which resulted in large indirect tourism (Wearing, 2003).

Changes are being fueled by technological advancements such as: The easy access to information about the tourist destination is one of the primary factors that promotes changes in the tourism sector by increasing the location’s worldwide attractiveness. Due to the introduction of the Internet, which has facilitated the process of sharing information regarding the many locations and attractions within the country, the services offered, and so on, this element has been quite useful for the chosen destination.

It has gotten a lot easier over the previous few decades. This, together with other technological advancements like as the introduction and quick spread of mobile networks, has been able to propel the destination’s tourism boom (Wearing, 2003).

Changes are being driven by infrastructure development: Following the liberalization of the economy, the country has witnessed significant improvements in the destination’s infrastructure, particularly in terms of highways and airlines. The expansion of India’s low-cost airlines has been one of the country’s key contributors to both domestic and international tourism.

Foreign visitors to India have grown far less anxious as a result of the country’s tremendous cultural transformation. This has been fueled by the availability of information, which has transformed the perception of the destination from one of danger to one of relative safety, as seen by the incremental proportion of female visitors for the dentation, which has increased by 40% over the time.

As a result of the changing social characteristics of the location, international travelers have gained more confidence, and therefore this transformation has occurred. As previously said, India’s economy has seen substantial changes, resulting in the establishment of IT and outsourcing positions in the country, all of which have been able to increase inbound business visits from other countries. This type of indirect tourism is frequently extended for longer vacations, and because these tourists have a strong purchasing capability, the result is a slew of good developments. In the last four years, the percentage of entering persons for professional and business reasons has climbed from 15% to 22.5 percent, as shown in the table below.

LO 2 Understand current trends in the travel and tourism sector

The goal of this section’s duty will be to examine and analyze numerous challenges that are now causing multiple changes in the UK’s travel and tourist business. Also, using proper resources and methodologies, a specific current trend in the tourist sector of any chosen tourism industry will be examined. For this component of the job, a specific travel and tourist location will be picked, on the basis of which the subsequent discussion will be held.

Bhutan is the place that will be investigated for the aim of niche tourist destination study.

P 2.1 Evaluation of current trends leading to change in the travel and tourism sector of the UK

The most important current trend influencing numerous developments for the destination is the expansion of the country’s tourist infrastructure. The UK government is putting a lot of emphasis on the growth of the service industry, which is having a good impact on the country’s travel and tourist business. Because of the fast expansion of regional airports, the connection of the destination’s interior sites has improved, as has the advent of numerous low-cost airlines, which is a critical aspect in the development of any country’s tourist business. In addition, the internet has simplified the international flying process.

The recent global economic catastrophe as well as the Euro Crisis, on the other hand, have had the ability to severely impact the destination’s tourism and damper incoming travelers to some level. Due to the reasons, in light of the fact that the disposable income of potential incoming tourists to the country has decreased dramatically over the previous 5-6 years, the destination has seen a loss of tourism revenue, as well as a medium-term downturn in the sector. The fact that the British pound is one of the most expensive currencies in the world also has an impact on the destination’s appeal to arriving tourists.

LO 4. Understand the impacts of change on the travel and tourism sector

This component of the assignment will be completed with the goal of conducting a study of the effects of changing challenges and trends on the tourist sector with respect to a specific firm, as well as the implications of failing to adapt to these market changes. In this job, we will use the example of a specific firm in the travel and tourist industry to examine how the company would be harmed if it fails to respond to the changes.

P 4.1 Analysis of impacts of trends and issues which are driving changes in the sector

The travel and tourism industry’s myriad shifting components and trends have a variety of consequences. Because the tourist sector is a service industry that is extremely consumer specific, firms must continue to make various strategic decisions for the company in light of these shifting circumstances. Changes in technology have a significant impact on the industry’s firms, resulting in big strategic transformations. The travel and tourism business has seen a lot of beneficial improvements as a result of this. The introduction of the internet and social media has changed the way information is shared in the sector.

For location selection, 36% of travelers use various social networking platforms.

These changes have made social networking websites extremely crucial for enterprises in the sector to make strategic decisions, necessitating the creation and management of numerous pages on well-known social networking websites in order to engage with customers and influence their decisions (Mill, 2002). Collette Vacations places a major emphasis on technology as a marketing communication tool.

“We are having online engagement with our consumers on platforms like Facebook sweepstakes has aided in delivering vital customer reaction,” says Paula Twidale, the company’s Executive Vice President.

Another major component that determines pricing and profit margin for a corporation is the economic factor. Because the spending power of potential tourists decreased during the economic downturn, firms were forced to utilize a single price strategy for premium and online channels, which had some detrimental consequences for the sector.

The issue areas that are now causing a shift in the travel and tourism industries of India and the United Kingdom are among the reasons examined in this study. These present challenges have also been investigated using relevant methodologies and resources, which include a variety of data and statistics from linked tourism sites, as well as conclusions drawn from them. There was also a thorough discussion of Bhutan’s particular tourist offering, which is responsible tourism. The country engages in responsible tourism, and a brief explanation of the location, as well as the reasons for its growing popularity and current travel data for the country, has been provided. An analysis of the approaches that the travel and tourism industry can take to respond to the various changes that are occurring in the industry, the development of a few strategies for the chosen travel and tourism organization to respond to these changes, and an explanation of how the implementation of these strategies will further assist the chosen travel and tourism business to respond to the changes are some of the other topics that have been discussed. The impact of rapidly changing challenges and trends in the tourist sector, as well as their ramifications for enterprises, has been investigated.

Unit 6 Contemporary Issues in TT Sector Assignment is provided by qualified writers with the guaranteed good marks, We are posting free units solutions so scholars can explore the our assignment help and get review the quality of our work.