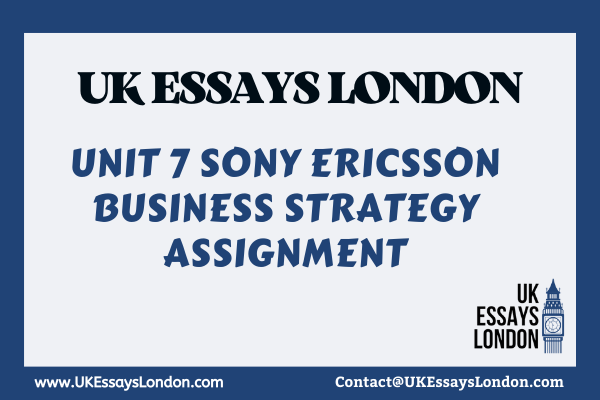 Sony Ericson is one of the world’s major manufacturers of mobile phones, PC cards, and phone and radio accessories. It is a joint venture between Sony, a Japanese company, and Ericson, a Swedish enterprise. Sony is a major producer of electronics, whereas Ericson is a major provider of network infrastructure and telecommunications. Following the merger, London remained Sony Erickson’s worldwide headquarters, with important operations in the Netherlands, China, the United States, and France. There are many possible business level strategies for the firm.

(LO 3.1, 3.2) Evaluate possible strategies that can be implemented in Sony Ericsson

Sony Ericson can establish an upstream integration in terms of business strategy. This is where the corporation must work hard to secure ownership and control of mobile phone accessories as well as spare components required to manufacture or repair their cell phone brand. This will keep the accessories and spare parts from falling into the hands of the rival. Sony Ericson can use a variety of business-level techniques, including:

Sony Ericsson may pursue a business level differentiating approach (Steiner 2010). Based on the assignment extract, Sony Ericsson’s key rivals, including as Motorola, Inc., Nokia, and Samsung, provide devices that are nearly identical to Sony Ericsson’s. In general, the differentiating business level approach will promote innovation and utilise trustworthiness. Sony Ericson might boost its innovativeness by releasing new cell phone designs with greater features and better battery life than earlier versions. Furthermore, in terms of trustworthiness, the company might decide to engage in security-related efforts. Because there is a common lack of responsibility among open source competitors, this may offer them an edge.

Sony Ericsson’s sales in the third quarter of 2008 were €2,808 million, according to the extract report. This represented a 10% decrease when compared to the third quarter of 2007, with a total turnover of €3,108m. As a result, from 2007 to 2008, their gross profit fell by 35% (Sony Ericsson Press Release 17/10/2008). The corporation may enhance this by offering a slightly cheaper price for their items than their competitors. This will eventually raise sales volumes, which will enhance profit margins. The firm’s goal and vision mention low prices as a component of company level strategy.

Sony Ericson’s objective is to be the most inventive and appealing brand in the cell phone business worldwide. This is critical since potential clients will be aware of the company’s presence, especially if their prices are marginally cheaper than their competitors. Furthermore, according to their vision statement, the corporation aspires to be the primary driver or pacesetter in the global communication sector. As a result, the firm’s goal may be consistent with the low-cost business level plan since it will allow most people to purchase its goods. Therefore, success of the firm in providing low price and user friendly mobile phones may result in a massive sales turnover within a very short period around the globe. Furthermore, the firm will be able to create a large customer base, earning it the economies of scales and even improving the company’s future chances in the communication sector (Lennon 2011). This large consumer base may necessitate sophisticated technology requirements, which the company now lacks. According to the SWOT analysis, the company’s vulnerability in terms of technical innovation is the creation of mobile phone designs with huge switches and low-life batteries. Since a result, their competitors have gained market share as customers prefer their competitors’ phone and radio designs. When paired with technical advancement, Sony Ericson’s difficulties may be solved at a low cost as part of its Business Level Strategy.

Another type of business level strategy that Sony Ericson might use is corporate level strategy. A firm’s operation is basically a single unit that employs multiple segments that add value by delivering a variety of solutions in this approach. These solutions may be provided alone or in conjunction with other technologies, systems, services, goods, software, and funding. It is recommended that Sony Ericson implement a company level plan that combines both vertical integration concentrations and a single business strategy. The single business unit will allow the company to compete successfully within a single business unit framework. The benefit of this type of business is that it will allow Sony Ericson to focus its whole collective resources on achieving market domination and so becoming a success in the communication sector, which is consistent with the firm’s goal statement. Diversification is an alternative to company level strategy. However, this has its own drawbacks because the business may end up spreading its resources too thin, limiting or prohibiting the firm from capitalising on prospective chances in the near future due to a lack of resources and capital availability. In PESTEL research, for example, Sony Ericson is already lagging behind its competitors in terms of technology due to a lack of money.

In comparison to Sony, rivals employ smaller switches and semiconductors. To minimise future capital declines, the corporation should reject diversification as a business level strategy and embrace corporate level strategy.

Despite the fact that focusing on a single business unit plan may not be particularly productive, Sony Ericson may increase its market share by promoting its core competencies approach. Core competence is defined as a distinctive quality that a corporation recognises as the best method to work with personnel (Smith 2012). The firm’s key competency plan is the sustainability idea, which envisions stronger working relationships with workers while also being highly sophisticated and competitive.

The implementation of the core competence plan will propel the organisation to greater heights in terms of revenue and market share in the future.

Sony Ericson’s other corporate level strategy is already planned for in the company’s goals. A company’s objective might be focused on increasing its market share, improving the quality of its products, or improving technology. For example, the firm’s target in the 2011 sustainability report was to cut greenhouse gas emissions from the complete life cycle of our goods by 15% by 2015, based on 2008 levels.

Sony Ericsson was founded in 2001 as a joint venture between Sony of Japan and Ericsson of Sweden. Its headquarters are in London. Sony Ericson operates in approximately 140 countries worldwide, with sales in Africa, Asia, and Latin America accounting for more than three-quarters of the company’s revenue. To strengthen its operations, the firm must implement an international strategy that focuses on how it intends to operate and compete on a worldwide scale. This can only be accomplished by adding “value” to their products. One method would be to move their value mobile phone goods with new features and abilities to international markets, particularly those where their primary competitors lack such products and talents. Notably, despite the fact that the majority of Sony Ericson’s revenue originates from outside sales, the company prefers to centralise significant decision making as well as other fundamental services in London. The inference is that market decisions must be taken at the Company’s headquarters, with less attention placed on events in other countries with distinct markets. Furthermore, the items are seldom customised to meet the various consumer tastes. This necessitates the adaptation and modification of freshly introduced items, which is rarely done. As a result, for the company to strengthen its international operations, it must decentralise parts of its decision-making processes and be willing to make product alterations to adapt to the various local markets.