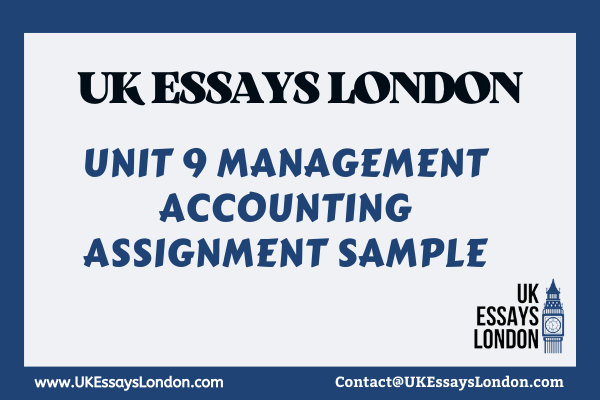 Budgeting is a necessary component for an organization’s successful operation. Budgets are created to identify a company’s financial requirements and the most efficient use of existing resources in the company’s operations. The report has been developed to show the influence of various sorts of costs on the organization’s operations. The study offers a summary of the various costing methodologies as well as an explanation of the nature and behaviour of costs. The cost variance, both positive and negative, has been calculated and analysed, as well as the reason for which budgets are generated in organisations.

AC 3.1 Explain the purpose and nature of the budgeting process

The practise of planning the company’s costs is known as budgeting. Budgeting is done in an organisation to see if the firm has enough money to cover its costs. The budget was created by the company’s finance department and aids in the forecasting of the organization’s financial resource requirements. The budget is a forecast of sales and income for a specified period of time (Alino & Schneider, 2012). The primary goal of budgeting is to forecast the organization’s revenues, costs, and spending.

The company’s success may be monitored with the aid of budgeting.

The organization’s decision-making process can be carried out properly and efficiently.

The budget allows the organisation to assess the financial resources available to it (Alino & Schneider, 2012).

Budget planning is done ahead of time in order to effectively allocate the organization’s resources.

Control may be maintained and managed across the business for the benefit of all departments’ activities.

The budget created by the organisation gives the company guidance in order to meet the organization’s goals and objectives.

The firm’s cash flow may be forecast ahead of time, allowing the corporation to make the best use of its resources (Alino & Schneider, 2012).

Coordination among managers in a company may be achieved through an effective budget procedure in order to keep production costs to a minimum.

One of the most significant aspects of the budgeting process is to remove or decrease risk in the company’s operations.

AC3.2 Budgets can be produced for different purpose and needs. You are required to select appropriate budgeting methods for the organization and its needs.

Various budgeting approaches are utilised in different organisations. Companies use appropriate budgeting strategies based on their demands and organisational type. Budgeting techniques include the following:

Budgeting from zero: In zero-based budgeting, the budget starts at zero. This technique of budgeting starts from zero and determines the distribution of resources in each department of the firm, as well as reviewing the budget at regular intervals. In zero-based budgeting, there are numerous phases that are followed, including managers’ decision-making activities and their efforts to reduce expenses and eliminate duplication of tasks (

The following are the requirements for zero-based budgeting:

The concept of zero-based budgeting is useful in determining the most cost-effective activities in the organization’s company.

The organization’s decision-making process is enhanced since managers are involved in making efficient cost-cutting decisions.

The following are the requirements for incremental budgeting:

The incremental budgeting procedure is easy since it does not need the creation of a new budget, and the new budget is created while taking into account the prior budget.

The organization’s departments have stable operations, which helps the organisation perform its operations effectively.

The organisation has access to funds on a continuous basis.

Changes that influence the organization’s operations can be identified quickly (Alino & Schneider, 2012).

It is assumed that 60% of all sales be turned into cash in the month of sale, with the remaining 40% received in the month following the sale.

In terms of buy units, it was said that purchases are made for the following month’s production, implying that there is a time lag between purchasing raw materials and transferring them to the manufacturing department.

Payment for purchases is made in the month after the transaction.

Because depreciation is a non-cash expenditure, it is subtracted from the overall overhead cost.

The majority of overhead costs are paid in the month of production, with the remaining 20% paid in the following month (Alino & Schneider, 2012).