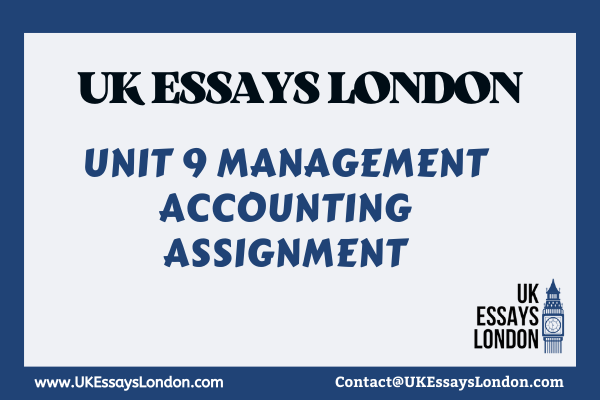 Management accounting encompasses a variety of elements, ideas, and provisions that aid management in making sound decisions. They produced excellent resource utilisation planning with the use of concepts and provisions. The costing and budgeting sections are the most important. The term “costing” refers to the cost of a production process or the process of calculating costs. The practise of creating budgets or planning for future revenues and expenses is known as budgeting. Different areas of costing and budgeting are covered adequately in management accounting.

There are several types of costs that are addressed in detail below, including: –

Material costs: Material is necessary to conduct the manufacturing process since it is the most important component. In the lack of material, the production process is not a single-step process (Drury, 2012). Sparky Ltd. must pay a fee for obtaining material, which is referred to as material cost. The cost of labour is the second most important factor in the manufacturing process. As labour is the component that carries out the prescribed tasks. Sparky ltd. is unable to conduct production process tasks without labour or personnel (Drury, 2012). They pay wages to workers, which are referred to as labour costs.

Overhead costs: There are a variety of costs associated with various activities related to the product and manufacturing process. It accounts for paid insurance, legal costs, rent and repair payments, taxes, and many other expenses (Drury, 2012). These expenses are collectively known as overhead costs.

Direct cost refers to the portion of the cost that has a direct and complete link to the manufacturing of a certain Sparky ltd. product. The amount paid for raw materials, labour, and manufacturing supplies, among other things.

Indirect cost: Any expense that has an indirect relationship to Sparky Ltd’s manufacturing process is referred to as indirect cost (Drury, 2012). Costs incurred in the form of administrative and overhead expenditures

Fixed cost refers to the portion of a cost that does not rise or decrease as a result of increased or decreased production or sales of items or services. This cost includes insurance, rent, and other expenses.

Variable cost refers to the fraction of a cost that changes depending on the proportion or ratio of products and services produced. It includes the cost of materials, among other things (Drury, 2012).

Semi-variable cost is referred to by a variety of terms, including semi-fixed cost and mixed cost. The reason for this expense is because it is a fantastic mix of variable and fixed costs. For a given level of output, costs are fixed, and then they are transformed to variable costs. If there is no production, the fixed cost share is incurred.

Stepped cost: That portion of the cost that does not fluctuate continuously with the change in activity, but rather at distinct times (Drury, 2012). Step costs are constant inside a given border and fluctuate outside of that limit.

1.2 Use different types of costing methods (Define the following methods)

Work costing: In this strategy, various expenses associated with each job are gathered and aggregated individually (Feng & Ho, 2016). Each task is recognised separately, which is necessary for analysing cost per job.

Batch Costing: This method of costing uses batches to calculate costs. Every batch is assessed for unit cost in this enlarged form of task costing.

When a product process has many stages in order to generate a finished product, the cost is determined at each stage of the process (Feng & Ho, 2016). This is because each process produces a unique result, since the completed product of one process becomes the raw material for another.

Contract costing: Each contract has its own account, which works similarly to job costing. When a work is large in scope and will take a long time to complete, contract costing is used.

Service costing: The service industry uses this costing approach since they provide services rather than produce goods (Feng & Ho, 2016).

Method of calculating the average cost:

To compute the cost of goods sold and closing inventory, this technique depends on the average unit cost. Because average cost is used, it has little influence on the balance sheet and income statement.

Analysis of routine expense reports: – The goal of a cost report is to compare actual and budgeted outcomes, which leads to deviations (favourable and adverse). These differences are then used to get information about their overall performance. From the beginning, there has been a variance in the produce units since management has failed to manufacture units according to budget, resulting in a disparity of 100 units. Second, real labour unit expenses are somewhat higher than anticipated costs, with a difference of £1,000 between the two (Alino & Schneider, 2012). The cost of power and maintenance is lower than expected, indicating that management is making efficient use of electricity. These favourable variance results aid in achieving normal earnings. In light of this, a customizable cost report is created, which aids in the evaluation of organisational performance. All other aspects become more favourable as a result of this report, with the exception of one, and that element is labour, which results in a £1,000 loss (Alino & Schneider, 2012). This is the only component in both studies that lowers the overall profit share.Suggestions for better improvements: – Both reports mentioned that the labour department is the sole issue that has a negative influence on their profit generating potential. Management must significantly increase labour efficiency. To boost their efficiency, they must divide them into separate skill groups and then schedule training and development sessions appropriately. When their labour is improved, an appropriate amount of improvement is observed among other aspects, such as material utilisation or any other element (Weetman, 2013).

Indicators of financial performance: – A variety of financial accounting metrics are used to analyse the overall performance of a corporate organisation. Profitability, liquidity, gearing, and investor ratios are the four sectors that these performance indicators are divided into. Profitability measurements are concerned with profit making potential and whether or not they are achieving the specified objectives (Pazarceviren, et. al., 2015). Liquidity metrics assist in determining their capacity to have liquid cash on hand in order to fulfil their regular expenditures. The use of debt finance in relation to equity capital was the subject of gearing measures. If the debt-to-equity ratio rises, it indicates that the firm is becoming more dangerous, and vice versa.

Indicators of non-financial performance: – Non-financial performance indicators are indicators that are not financial in nature. These elements or indicators primarily concentrate on assuring the organization’s performance, such as human resource management, service and product quality, brand recognition, and business profile (Pazarceviren, et. al., 2015). Various topics connected to human resource management are covered in the management of human resource, such as staff turnover ratio, absence rate, work satisfaction status, and many more. The quality of a product or service is determined by the replies provided by consumers in the form of feedback and suggestions.

Finally, the complete conversation came to the conclusion that the costing section concentrated on realising various cost kinds and methodologies in order to regulate and monitor the cost utilisation across various activities. Cost reports are created and expenses are used to assess overall performance in order to measure overall performance. Total quality management, the lean system, and the balanced scorecard are some of the metrics or strategies used to improve their performance. The budgeting section discussed the many budgeting methods used by management to generate their various budgets. The budgeted funds are then used to conduct variance analysis in order to assess their overall performance and make necessary modifications.