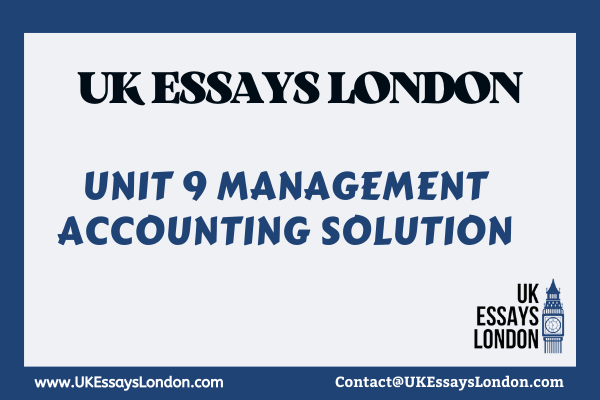 The Management Accounting Solution talks about the costs that the organisation has incurred in the past, present, and future. It also goes through the various methods for keeping track of inventories. Various cost variances are determined in the assignment by comparing them to the real budget to determine their impact on the business. Management accounting also comprises a number of budgets that may be compared to real business results. The assignment also discusses various costing and budgeting systems, as well as the causes of variation. It also goes through several corrective actions that will aid the company strategy’s process improvement.

2.1 Prepare and analyses routine costs report by carrying out a variance analysis for ABC Ltd.

Production unit variance- The ABC LTD. produced 1000 more units than the budgeted amount. Manufacturing the 2000 units cost $9.05 per unit, which climbed to $9.06 per unit. The per unit cost did not change significantly, but the corporation may have decreased the per unit cost by exercising efficient cost management.

Direct material – The per unit cost of material utilised during the manufacture was budgeted at $3. The actual material cost per unit was $2.83. As a result, the firm has made the best use of its raw materials (Miao, Xu, Qiu, Qing & Tao, 2015).

Direct labour – The anticipated per unit labour cost was 2, while the actual cost was 2.83, which was much greater than the budgeted amount. As a result, the corporation must make an attempt to lower its per-unit labour cost.

Depreciation- The adjustment in depreciation cost was 200, which is not excessive when compared to the budgeted amount.

Rent and rates – The rent and rates both increased by 100, so the cost established in the budget hasn’t changed significantly.

Insurance – The cost of insurance was increased by $1400, which was substantially greater than what was originally planned (Pilleboue, Singh, Coeurjolly, Kazhdan & Ostromoukhov, 2015).

2.2 Use performance indicators to identify potential improvements for ABC Ltd.

The revenue per unit was 10 in the budget and 10 in the reality, thus there was no consequence.

Direct material- There was a positive variation since the per unit cost was lower than the budgeted amount.

Direct labour costs were negative since they increased significantly from the budgeted amount, reducing the budget’s income.

Depreciation- The depreciation cost variance was likewise positive because there were little modifications from the projected budget (Ray & Jenamani, 2015).

Rent and rates – the rent and rates did not differ much from the budgeted amounts, thus the variance is beneficial.

Insurance- The actual cost of insurance was substantially more than the established budget, resulting in a negative variance.

Added value – The difference between the selling price of a product and the direct and indirect inputs utilised to make that product is known as added value. The projected profit of ABC ltd. was 1900, while the actual profit was 6800, indicating that the firm earned a bigger profit than the anticipated profit. To lower manufacturing costs, the corporation must make an attempt to cut labour costs as well as insurance costs (Jena, 2016).To increase the quality of the output, total quality management needs the use of strategy, data, and communication. TQM requires all members of the organisation to engage in improving the company’s existing processes in order to increase the quality of the final product. TQM’s main principles include

Approach that is systematic and strategic

Causes and recommendations:A positive material variance indicates that the material is being used effectively in the organisation. It is demonstrated that by eliminating waste, the material may be used more efficiently.

Causes and recommendations:Labor variation is undesirable and can be caused by expensive labour availability; however, it can be rectified via effective training and efficient labour use (Roper & Ruckes, 2012).

Causes and recommendations: Variable expenditures can be minimised by utilising resources properly.

Causes and recommendation:Unfavorable variance of sales volume depicts that sales target are not achieved from the budgeted sales. It can be improved by proper training of the sales persons and by proper marketing schemes (Jamaludin, Shariffah, Mohammad & Ahmad, 2014).