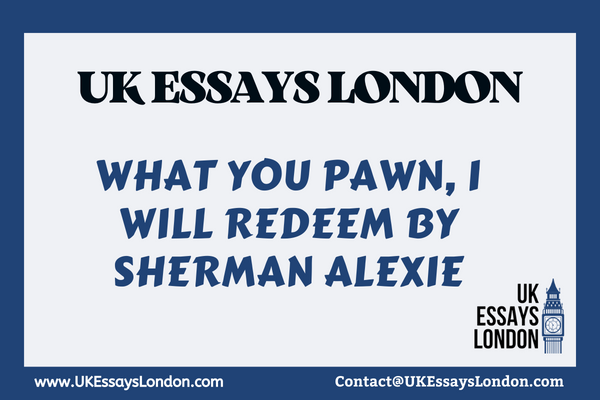 The short narrative focuses on Jackson’s attitude and how he must constantly choose between getting his grandmother’s property back and pursuing adventure and happiness by splurging on friends and drink (Alexie, S. 2003). The author addresses the significance of cultural property for Native Americans and how they honour their vanishing traditions in this narrative. The main topic centres on Jackson’s persona, his quest to understand himself, and his efforts to right his wrongs.

Additionally, the aim of this book is to persuade the reader to consider the injustice done to Native Americans and how their most prized piece of land was taken from them.

Jackson is a young man who is homeless, either because he wanted to be or because his status and circumstances compelled him to leave his shelter. His homelessness provides insight into the homelessness of Native Americans, who were forcibly removed from their lands and possessions without any justification. Early explorers forced them into a corner, and the United States’ unfair policies and ignorance have continued to do so. Jackson tells us that being homeless and being Indian are two of “his people’s” most prevalent characteristics (Alexie, S. 2003).

This demonstrates that, like the majority of Native Americans who take pride in their heritage, Jackson loves his culture and ancestry. He also emphasises his equal rights and the land that was taken from his people, but he doesn’t protest. He values his life of homelessness and how he interacts with the inhabitants of Seattle’s streets by obtaining free food (Fletcher, M.L 2006). The book’s opening words are as follows:

Understanding the goal and subject of the short story requires understanding the title, “What You Pawn, I Will Redeem.” When anything is pawned, it is given to the pawnshop in exchange for a loan. Only after the loan is fully repaid is the item redeemable. The regalia that had been left for Jackson’s grandmother was never claimed by the person who had left it, giving Jackson the opportunity to claim it for his grandmother, who highly valued it as a reminder of their rapidly disappearing culture. Jackson’s salvation from his sins or whatever errors he had made involved the regalia.

Sherman Alexie has written a novel that illuminates not only Native American culture but also the hardships and battles they have faced. The reader is made aware of the majority of Indians’ circumstances right away, including their substandard housing conditions, homelessness, and lack of employment. Native Americans have always responded to their challenges and grief in a peaceful, pleasant, and joyful manner, despite the injustice demonstrated by the US government (Troyer, R.A. 2008).

They are depicted singing, dancing, and enjoying the little pleasures in life, such as a clean restroom, free food, and the compassion of Americans of various races. Jackson’s traits are extremely similar to those of all imaginative Indian storytellers, who give every regular act of daily life an incredible significance. They use comedy and a mystical undertone to communicate about their suffering and daily struggles. Due to the suffering they endured for generations, they view every moment of comfort as a blessing even as they suffer (Fletcher, M.L 2006).

The short story is a lovely piece of literature that teaches its audience about a variety of topics, such as Native American culture, the process of atonement, and choosing between duty and desire. Jackson recognises that he has a duty to complete even if he enjoys his exciting life of homelessness and the new challenges presented to him every day. The plot contrasts the responsibilities of adulthood with the allure of youth.