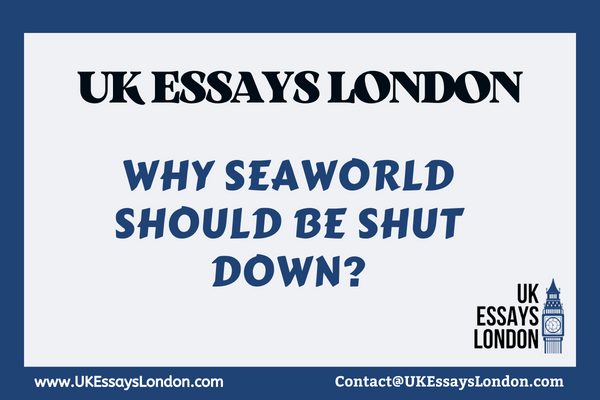 Why SeaWorld Should Be Shut Down?

The pictures on the website created by the SeaWorld theme park organisation are enticing and appealing enough to convince anyone to visit that location. The website also emphasises the idea that the company will be able to save more animals if more individuals purchase tickets. The business has also included the total number of animals saved throughout the years, which is 31,644. The most important thing to realise is that SeaWorld is not as animal-friendly as it makes out to be to tourists and web users. There have previously been concerns made about the company’s mistreatment of the killer whales.

When SeaWorld’s foundations were laid in San Diego in 1964, visitors came from all over the nation to see the freshly constructed park. It was in the news for a while before the 2013 release of the Blackfish documentary, which received harsh criticism for the park. The ratings for SeaWorld decreased as more people viewed the movie. The park, however, paid little attention to the criticism it got and instead stood by its position and assured the public that the sea creatures were being cared for. The park claimed that the aquatic creatures were lovingly cared for and kept in big aquariums.

Four individuals have died at the park since it opened, three of whom were trainers who perished at the hands of the orcas. Tilikum, an orca that had been captured in the 1980s when it was just two years old, was known for being one of the most deadly aquatic animals kept by SeaWorld. The park continued to run performances with Tilikum in them despite the fact that the infamous orca had killed its trainer. The way the park responded to the departure of three employees revealed that they didn’t care about their staff members, only their ratings. Following the slaughter of its third victim, the orca was imprisoned in isolation for a year. The orca’s mental functions were entirely impaired throughout the isolated period.

Tilikum’s misery and suffering were inflicted upon him by both humans and other orcas due to the aggression that had been ingrained in him as a result of all the stress, according to an essay that covers the stories of animal brutality by providing facts and data. The first people to capture Tilikum were Sealand, who kept the orca in captivity for more than a year and trained him to perform nonstop, seven days a week, according to the article Over Thirty Years and Three Deaths (“SeaWorldofHurt”). The orca had become hostile due to the stress of being cut off from his family and the water.

After one of Sealand’s trainers died, Tilikum was put up for sale and eventually purchased by SeaWorld, where the treatment of the sea animal was perpetuated for years. The poor animal was mistreated by SeaWorld trainers just as Sealand trainers since he didn’t perform as required in front of the audience. The difficulties orcas encounter when they are forced out of their natural habits and forced to pick up routines that are not meant to be learned by orcas, such as performing in front of crowds seven days a week and going without food for days, are highlighted in a book about the treatment of sea creatures.

In addition, orcas in the wild can live up to 50 years, however in captivity, the typical orca only reaches the age of 13 years because to the stress that their trainers’ treatment of them causes (“SeaWorldofHurt”). The National Oceanic and Atmospheric Association emphasised that while female orcas were anticipated to live up to 50 years old, male orcas had been recorded to live up to 30 years. However, it was shown in a piece on why orcas shouldn’t be maintained in SeaWorld that their life expectancy was lower than typical in this area with a water theme.

One of the reasons the orcas had been hostile toward other tank mates and trainers was that they had been removed from their native home and made to adopt new behaviours. It was highly abnormal and not unusual for the orcas to have been altered to the point where they forgot their native behaviours and behaved like new orcas. Most researchers indicated that captive populations have contributed to the knowledge of killer whales and their physiological habits in an article based on the study of free-ranging and captive killer whale populations.

The findings provided information about the various behaviours of killer whales, including echolocation, diving, reproductive behaviour, and more (Robeck et al.). According to an article on killer whales, they are one of the oceans’ most dangerous predators and are typically found in areas that are suitable for them. Little is known about the ecotype of killer whales’ historical distribution (Morin et al.). The data gained, however, demonstrates that training such a dangerous predator in captivity for the purpose of amusing people is just impractical because the killer whales have the potential to attack the trainers at any time.

While animals at zoos aren’t required to perform tricks every day, orcas at SeaWorld were taught seven hours a day, five days a week, to perform for the audience. From the way the acts were presented, SeaWorld seemed more like a circus than a park (Halvorstadt). People responded that SeaWorld was torturing animals for entertainment when asked what they thought of the company’s shows because no animal anticipated to be dragged out of its natural environment and made to perform in front of throngs of spectators. The company ought to be shut down right away because it has been profiting off of animal abuse.

John Hargrove spent two decades working with 20 different whale species in two continents and at two SeaWorld parks in the United States. Hargrove’s childhood ambition of training orcas was realised. Hargrove, though, began to question if the whales’ demands could ever be met in captivity as his interaction with them grew deeper. Hargrove came to the conclusion that SeaWorld’s enormously successful programmes were bad for the whales and ultimately dangerous for trainers after two other trainers were murdered by orcas other marine parks.

Hargrove rose to fame as one of the stars of the contentious film Blackfish after quitting SeaWorld. With Hargrove lending his knowledge to an advocacy movement that is persuading both the federal and state governments to act, the outcry over the abuse of SeaWorld’s orca has now gone beyond the boundaries outlined by the award-winning documentary.

Hargrove creates an engrossing image of these highly intelligent and sociable animals in Beneath the Surface, including two of his favourite whales, Takara and her mother Kasatka, who are among the most powerful orcas at SeaWorld. And he contrasts orcas’ independence in the water with their life in SeaWorld by including vivid descriptions of orcas’ natural lives.

Humanity is only just beginning its trip toward the conclusion that the relationship between the human and animal worlds needs to be fundamentally rethought, just like Hargrove’s path.

In conclusion, it may be concluded that SeaWorld should be shut down because to the harsh treatment of the orcas. Sea creatures need to be able to swim freely, thus they shouldn’t be kept in cages or small enclosures. The treatment of marine life can be changed, and people can be protected from harm, by closing down parks with a nautical theme. SeaWorld must be closed for the benefit of both the orcas and the trainers, as demonstrated by Hargrove’s book about the care of the orcas there. Sea creatures cannot be coerced into developing odd habits, such as performing stunts or consuming unhealthy food. Since both animals and trainers are living, breathing creatures with inherent rights, neither should be placed in a situation where they could harm or be injured by another. The cruelty of SeaWorld makes one believe that, in our society, animals are nothing more than objects to be used for entertainment and to boost television show ratings. To ensure that SeaWorld entirely closes down and stops harming sea life for its own purposes, severe measures must be taken against it. It is crucial to understand that because orcas are not used to being kept in cages and pools, they are not meant to be treated as assets.