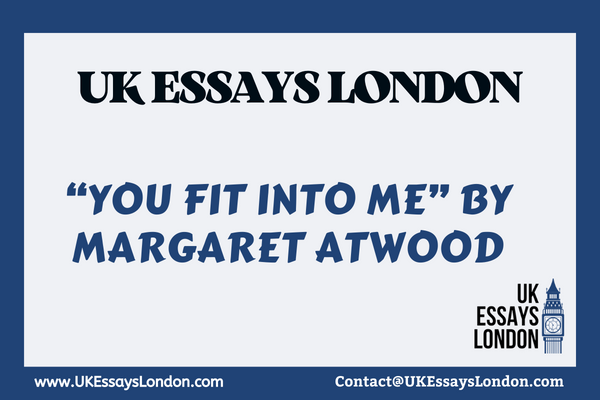 You fit into me

Four-line poems are the quickest approach to expose fundamental structures. Situation is established, followed by a shift that introduces new information and a subsequent resolution. Positive feelings of love and devotion are introduced in the opening line. She suggests that their relationship is strong and genuine by comparing their fitness to a hook inserted into an eye. that their compatibility is evident. However, the second line of the poem, “A fish hook in an open eye,” depicts the persona’s helplessness and agony after understanding that the love she believed to be true is not. She wishes to escape but is unable to do so. Even though the hook in the eye hurts, taking it out would hurt worse. To imply that ending a relationship would hurt more than staying

Different approaches are used to represent postmodernism. The LENGTH utilised is brief and has little information to begin with, just like the relationship. Metaphors make it simple for readers to understand what the poet is trying to communicate in the shortest amount of time. Readers can visualise a couple in love by reading the first lyric, “You fit into me like a hook into an eye.” The final stanza, “a fish hook in an open eye,” paints a picture of someone who is suffering as a result of a shattered relationship. The text is succinct but metaphorically expressive. Since there aren’t many words used, readers can understand that each one is crucial.

FORMLESSNESS: Contrary to how traditionalists regarded it, a piece of art is stronger when it is formless, ambiguous, and consistent. The poem consists only of two stanzas, each of which has two lines. Even though the poem is brief, it only contains two stanzas that describe the persona’s romantic experience. Poets can express themselves however they want when there is no formal structure. Not rigidly restricted to any length but rather freed to describe the world as preferred.

POPULISM, a feature, used enticing terms that readers are accustomed to. The audience is aware of the metaphors that are used. People can easily relate “you fit into me” to love or sexual relationships because they are familiar with how an eye and a hook are attached to clothing and understand how they relate to real-life love relationships. It always hurts when a fish hook points into an open eye, as the expression “a fish hook in an open eye” suggests. This is obviously about a failed relationship, but the persona is having trouble getting away.

PUNCTUATION: The absence of punctuation conveys a lack of concern or happiness, which contributes to the poem’s overall message. However, the second line, “fish hook into an open eye,” demonstrates how the relationship wasn’t one of bliss but was instead one that brought agony and unhappiness. “You fit into me like a hook into an eye,” displays intimacy and attachment just like the hook and eye fits to fasten a dress. The poet makes effective use of the pronoun “You” to give the impression that the persona is speaking directly to the audience, forging a connection. To prevent using numerous lines, quotations (“”) were used in their place. Because the lines are brief and enclosed in quotations, they read like sentences.